Chapter Eight: A Beacon of Light.

Virtual Pilgrimage Site: The Baton Rouge flood zone. An opportunity to reflect the light of God’s love to those in need!

The Healing Eyes of Mercy. A Journey Towards the Light of God’s Love.

Chapter Eight: A Beacon of Light.

Although the young woman had grown accustomed and somewhat comfortable in the darkness, God had never stop shining His light her way. As a result, a fellow classmate and friend began to draw her back towards the light of God’s love. This friend, very devoted to God, made weekend Mass attendance a regular part of her life. She had a beautiful voice and played guitar at the 11 o’clock Sunday morning Mass at a Catholic cathedral located just up the road from school. Slightly curious and feeling a little nostalgic, the budding professional decided to attend one of these Masses with her friend. God took notice, for when leaving, she felt a small ray of hope that had not existed for quite some time. Would this life line of hope grow large enough to fill her soul? Would she turn back to the light of God’s love or move forward into the darkness? In the face of uncertainty, one thing was clear, God would always be there patiently awaiting her response.

An opportunity to reflect the light of God’s love to those in need!

This aerial image shows flooded areas of North Baton Rouge, LA, Saturday, August 13, 2016. Louisiana Gov. John Bel Edwards says more than 1,000 people in South Louisiana have been rescued from homes, vehicles and even clinging to trees as a slow-moving storm hammers the state with flooding. (Patrick Dennis/The Advocate via AP)

Researchers now have a better understanding of how much damage was done during the destructive flooding in Louisiana and how long it will take to recover. According to recently released data from the Baton Rouge Area Chamber (BRAC), in East Baton Rouge Parish alone, over 70,000 homes were in the area that flooded. While in Livingstone Parish around 49,000 homes were affected. That’s more than 86 percent of all homes in the parish. According to BRAC, that represents more than $9 billion in damages. Businesses fared badly as well in the Baton Rouge Metropolitan Statistical Area, which includes East Baton Rouge and eight surrounding parishes. BRAC said over 12,000 businesses were impacted, which is around 35 percent of all businesses in that region. According to Andrew Fitzgerald, the Director of Business Intelligence, “There are about 136,000 workers that have been affected because of the flooding.” LSU’s Jim Richardson, who has been with the university for more than 40 years, has been following the flood and resulting damage closely. He estimated the recovery in Baton Rouge won’t be as difficult as Katrina, but suggested it could be at least a year before the city is back to normal. 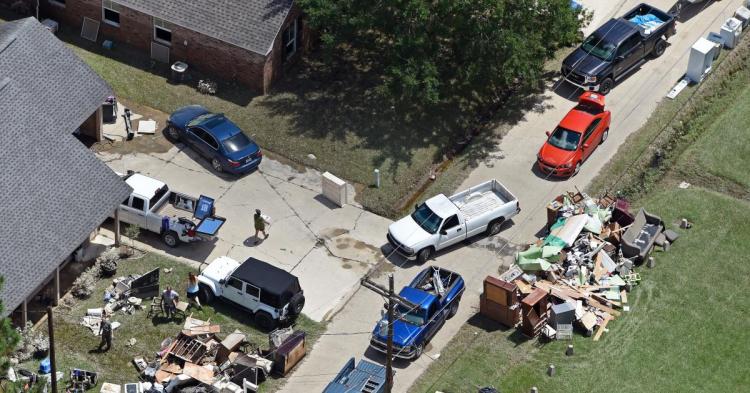 This represents a large population of individuals who are in great need of the light of God’s love in an otherwise dark time period in their lives. I hope that you consider showing God’s mercy through prayers and actions. There are many opportunities to help out. For instance, my church parish of Mary, Queen of Peace, located in Mandeville, has committed to assisting our brothers and sisters in need after the historic flooding in Baton Rouge and beyond. If you would like to help with flood relief efforts, or if you or someone you know needs assistance, the church office can be reached at 985-202-0232. In closing, I ask that we dedicate our concluding blog prayer to all those affected by the flood and the many hands of God reaching out to help!

Eternal Father, I offer You, the Body and Blood, soul and divinity of Your Dearly Beloved Son, our Lord, Jesus Christ, in atonement for our sins and the sins of the entire world.

For the sake of His Sorrowful Passion, have mercy on us and on the entire world. (Repeat two more times).

Jesus, I trust in You.

To learn more about my new book entitled, The Healing Eyes of Mercy. A Journey Towards the Light of God’s Love, please click on the link below.